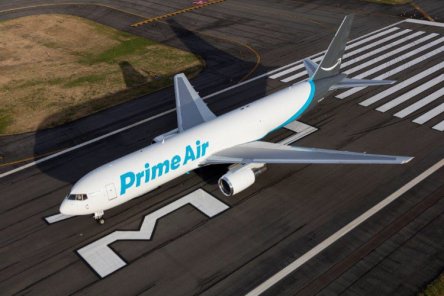 Ask anyone on the street to name a popular shipping company and you’ll likely hear “UPS” or “FedEx.” Few people would answer “Amazon.” That may change very soon.

Amazon has been bolstering its logistics network for the last several years. They now operate over 400 warehouses and 185 fulfillment centers in the United States, have a cargo fleet of 60 planes operating from over 20 airports and run 20,000 delivery vans. You may have noticed more of your Amazon orders showing up at your door without a UPS label. That’s because Amazon’s goal is to be its own delivery company.

The global leader in online retail is well on its way to doing just that. It’s estimated that one in every five deliveries is an Amazon package and 60% of them are delivered by an Amazon driver. The company spent $27 billion last year to ship items. That’s enough motivation to invest in their own network to keep that profit in their pockets instead of in UPS and FedEx.

UPS and FedEx are middlemen in the equation. We all know one goal in business is to remove the middleman from your operations. FedEx saw the writing on the wall and ended its ground contract with Amazon in August after suspending the air contract in June. FedEx stated the earned revenue from the contract was less than 1.3% of their total revenue. They also started wanting to focus on the broader e-commerce market rather than one specific company.

Ironically, it wasn’t long after the breakup that Amazon announced it would help third-party businesses develop their own surface delivery networks as part of their Delivery Service Program. FedEx then announced it would expand delivery services to seven days a week starting in January 2020.

Amazon has drastically changed the way businesses operate. Remember when Amazon debuted free two-day shipping with a Prime subscription? It wasn’t long after other retailers like Walmart and Target began offering free or discounted two-day shipping if a minimum order amount was reached. Retailers are trying to take a page out of Amazon’s playbook. Walmart now has 6,000 delivery trucks while Home Depot is developing its own supply chain and delivery system.

It once seemed laughable that Amazon could compete with UPS and FedEx, especially after DHL tried and quickly decided to stay in the international market. It’s no longer a laughable matter as Amazon has started referring to UPS and FedEx as “competitors.” It’s now a question of “when,” not “if.”

Amazon certainly has the money to be successful in developing its own logistics programs and software. The company reported $140 billion in revenue last year. It’s estimated that Amazon could save up to $2 billion if it can bring more shipping needs in-house. There’s no telling what that would do to UPS and FedEx. The shares of the latter companies dropped 20% in 2018 right as Amazon began handling more of its shipping logistics.

The Post Office could stand to take a hit from Amazon’s growing logistics network as well. They currently deliver 40-45% of Amazon’s packages in the final stage of delivery (also known as last-mile delivery). While USPS is great at delivering to difficult or remote addresses, Amazon may do some of that themselves with their growing fleet of delivery vans. This would result in USPS losing even more mail pieces and revenue than what’s already been reported.

While Amazon may be a long way off from equaling the number of flights UPS and FedEx conduct every day or reaching the package volume of those carriers, there is no doubt they are affecting change in the industry. More businesses look to Amazon as a model and will adapt their strategies to reflect the giant retailer, whether or not it includes UPS, FedEx, or USPS.

Amazon may not completely remove the middleman from the industry, but they will cut a hole in his pockets and take whatever falls into their hands.